My friend Oneita writes a great blog for the Free Press called O Street.  I've always admired her "tell it like it is" approach and her ability to connect with a broad audience all over the Metropolitan Detroit area.

Hugh hosted her Third Anniversary "Block Party" this week (we hosted two others at Mezzanine) and it was a Detroit Who's-Who.  What else would you expect from a Hugh party? 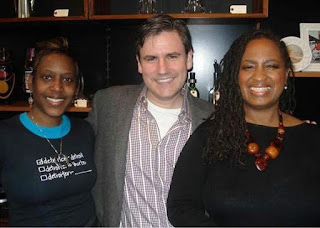 (Photo Sabrina Nelson)
I should be flanked by two beauties in every photo.  That's Oneita on the left, and fellow Lafayette Park resident (and writer of the great Marsha Music blog) Marsha Cusic on the right.

Take a look at some of the other photos from the party here.
at 1:22 PM